"S Harris"?   The name rings a bell.   '50s cartoonist, did a lot of slightly edgy sarcastic humor?   From my childhood I remember a volume of his stuff entitled Water on the Brain; one of the cartoons involved an outdoor drawing of a lot of workmen building a railway up to the blank face of a mountain, about fifty feet to the left of a completed tunnel.   In the foreground are two men with a set of plans; one is pointing didactically to them, and the other is jumping up and down in a fury screaming "I won't move my tunnel!   I won't!   I won't!".[Later:] Never mind, that wasn't S Harris.   I found it on the web: 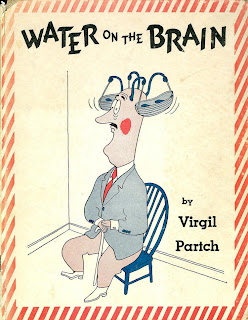 Bob and all, regarding the pentatonic scale, I have to share this YouTube link featuring classic improvisation artist Bobby McFerrin. I sense that lovers of words are also lovers of music. Turns out the pentatonic scale has some deep cross-cultural neural connections. Amazing performance, and a great demo of how our brains come already wired for certain things.

Some years ago I was listening to Schickele Mix.   At the end of the show Peter Schickele summed up by saying this had been an episode concerning music composed in the pentatonic scale, a word referring to the intense, "pent-up" emotions conveyed by such music.   While he was explicating, the phone by his mic rang.   Flustered, he answered it on the air; judging by his apologies, his boss had called to berate him for his poor research.   After he hung up, Mr Schickele retracted his definition; apparently, he said, "pentatonic" comes from the Greek word ("penta-") for "five", because there are five notes to the octave in that scale.   "It seems there must have been a bug in my entomology", he finished up, thus making me happy for a week.

Luke: I use that same device to help people remember.

Every now I'm in a discussion about a word's history and someone says entomology to which I reply "Oh, you like bugs?" They look confused until I explain myself.

I once told my coworker (who was wearing a bee costume for Halloween) that she was looking very apian. I think she might have gotten offended.

And I thought I was safe because she said she had a degree in entomology.

Luke: I think I subconsciously use the same mnemonic.

You're not the only one who gets them mixed up. I see journalists do it all the time.

I recently thought of this mnemonic device: Entomology is like antomology, while etymology makes me think of etcetera which originates in Latin.

Get the two confused and our beloved podcast would be "A Way with Worms."

Subscribe to the A Way with Words newsletter!
Martha and Grant send occasional messages with language headlines, event announcements, linguistic tidbits, and episode reminders. It's a great way to stay in touch with what's happening with the show.