Home » About A Way with Words » Hosts and Staff Co-host/co-producer Martha Barnette is the author of reader-friendly books on word origins. She has a background in ancient Greek and Latin, studied Spanish in Costa Rica, and worked as a newspaper reporter for major metropolitan dailies. Raised in the South, she now lives in San Diego, where she’s often found hiking mountain trails and performing with an improv comedy troupe. Read her full biography on her website. Contact her.

Co-host/co-producer Grant Barrett (he/him) is an American lexicographer and linguist specializing in slang and new words. He has helped produce dozens of dictionaries and has authored three books of his own. He’s a voracious reader, speaks a bit of French and Spanish, and spent years working in the jargon-rich jungles of information technology. Though born and raised in Missouri, and having been a long-time resident of New York City, Grant now lives in San Diego, California, with his wife, also a linguist and lexicographer, and their young son. Read his full biography on his website. Contact him. Senior producer Stefanie Levine is the dynamo behind the scenes who brings to the show two decades of experience in public radio. A self-proclaimed radio fanatic, she produced a daily news and culture program These Days and a nightly arts and performance program The Lounge for KPBS Radio in San Diego. She has produced A Way with Words since 2002 and developed the current on-air hosting team. Prior to working in public radio, Stefanie worked in the savings and loan industry as a mortgage underwriter and auditor for commercial loans. She also worked for the Resolution Trust Corporation as a member of an audit team. She studied theater at the University of Wisconsin, Madison, and received her BA in comparative literature. Stefanie works and plays in San Diego with her children, Rachel and Noah, and beloved husband, Michael. Contact her. Quiz guy John Chaneski is a writer, comedian, puzzle-maker, and the main quiz guy for A Way with Words. He has written for such television shows as Who Wants To Be A Millionaire? and Paid Off with Michael Torpey, and he has appeared as a quiz guy on the NPR quiz show Ask Me Another. He’s the author of Super Party Games: Fun & Original Ideas for 10 or More People and numerous word-search books for all ages, and he co-hosts popular pub trivia nights throughout New York City. He is a member of the National Puzzlers League. 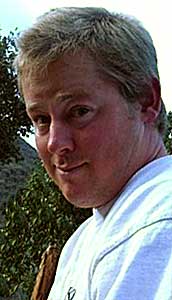 Tim Felten is the editor and engineer for A Way with Words, which means he handles the board during studio sessions and prepares the episodes for distribution. He’s also responsible for picking the great musical interludes you hear during the show. Outside of the show, he’s a composer and musician who plays organ and piano for bands such as The Fire Eaters, Pocket, and The Black Sands. Tim graduated from San Diego State University with a BA in music and earned his public radio wings at KPBS in San Diego, where he still works on occasion handling audio for KPBS-TV. Tim also enjoys camping, surfing, and micro-brews, especially when all three are mixed. He lives in San Diego with his wife and cat.

Production Assistant Rachel Elizabeth Weissler received her doctorate in linguistics at the University of Michigan, Ann Arbor (GO BLUE!). She researches how varied linguistic knowledge modulates neurological processing of standardized and minoritized American Englishes. Rachel is thrilled to be engaging in public linguistics efforts through her role with the radio show. Website: rachelelizabethweissler.com. Email: racheliw@umich.edu